A cheeky reblog to celebrate the Marriage Equality Act coming into action today in En-Zed – LOVE ALL THE PEOPLE!!! 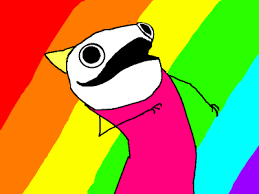 Hell to the YEAH! The following is a totally ‘gay’ celebration of progress and happiness, as told by pictures. Some of them are moving. It’s like Harry Potter in here. If Harry Potter was super gay and magically happy! ACCIO PROGRESS!

This wasn’t exactly a surprise, considering the previous readings were pretty clear majorities as well. For once we’re not the first in the world either – just a lucky number 13. We’ve had civil union since 2005, but this still held back certain rights legal, medical, and reproductive. But no more!

But two parents who actively want a kid are clearly going to destroy that child, right? Coz homo is contagious?

I’ll admit up front that I’m biased because I have two Mums. Yes, okay, I technically have a Father. Fuck you genetics. But…

Tell all your friends!

Use your words... Cancel reply

Recent stuff you should read

Your fave stuff to read

Time left in the UK

These people are wicked cool

"There is no doubt fiction makes a better job of the truth." - Doris Lessing

Dr Simon Schlomo Frood - On The Interpretation Of Stuff And That

The Official How To Blog

The official site of how to-ing.

Observations from the trenches....

Ramblings of a Kiwi in the Middle East

Your antidote for the neon crapfest we live in

Life, Jobs and the American Way.

Welcome to the fishbowl.

Procrastinating as a lifestyle choice